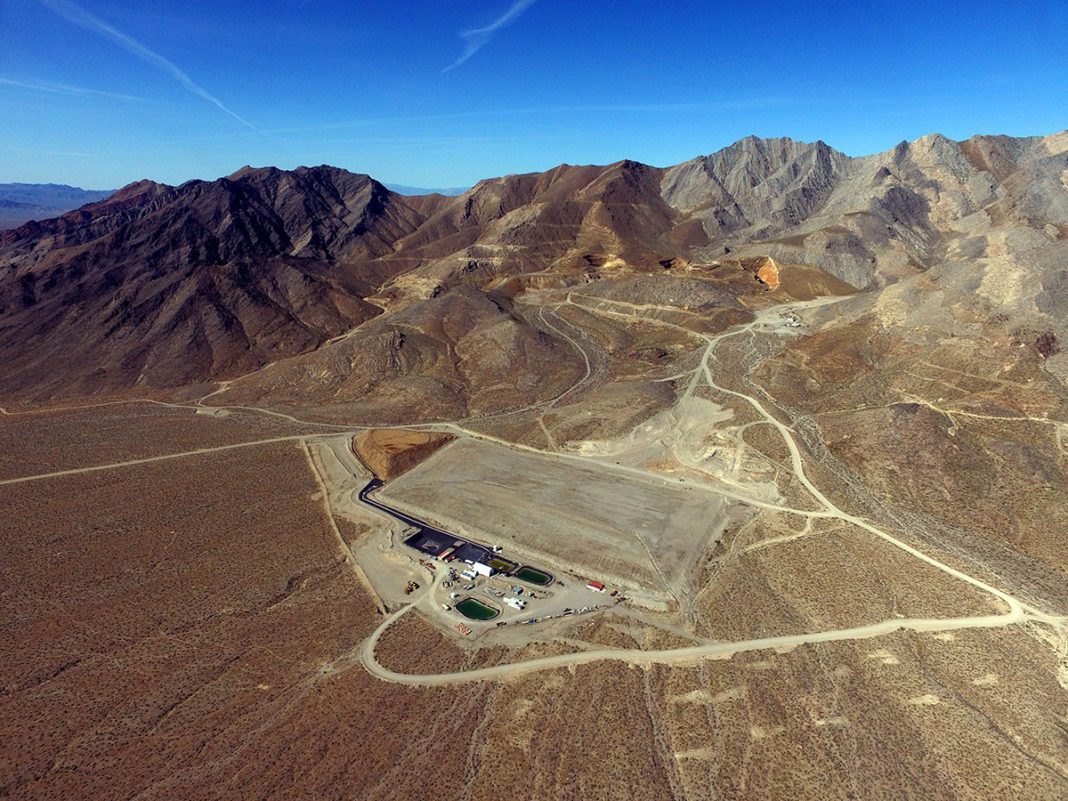 While most gold investors are familiar with the Carlin Trend – the largest gold-producing region in the United States – there are other, less explored parts of Nevada starting to attract a lot of attention. Specifically, the Walker Lane Gold Belt where company-making discoveries are being drilled.

Located in southern Nevada, Walker Lane has some of the most important mining districts in North America including Comstock, Tonopah, Goldfield, Bullfrog and Aurora. Estimated to host over 50 million gold ounces, the region is being actively explored by Kinross and Barrick at the producing Round Mountain Mine, Gryphon Gold at the Borealis Mine, and Newcrest Mining at the Redlich project.

Unlike the Carlin Trend, where most gold projects are mining ore less than a gram per tonne, Walker Lane is starting to stand out on its own merits with exceptional high-grade assays.

High-grade gold mine open for expansion

Northern Empire Resources (TSXV: NM; USOTC: PSPGF) is a well-financed gold exploration and development company focused on an emerging gold district in the Walker Lane Trend. The Sterling Gold Project hosts four distinct deposits, including a fully permitted, open-pit mine. The Sterling Mine is one of the highest-grade heap leach mines in the western United States. 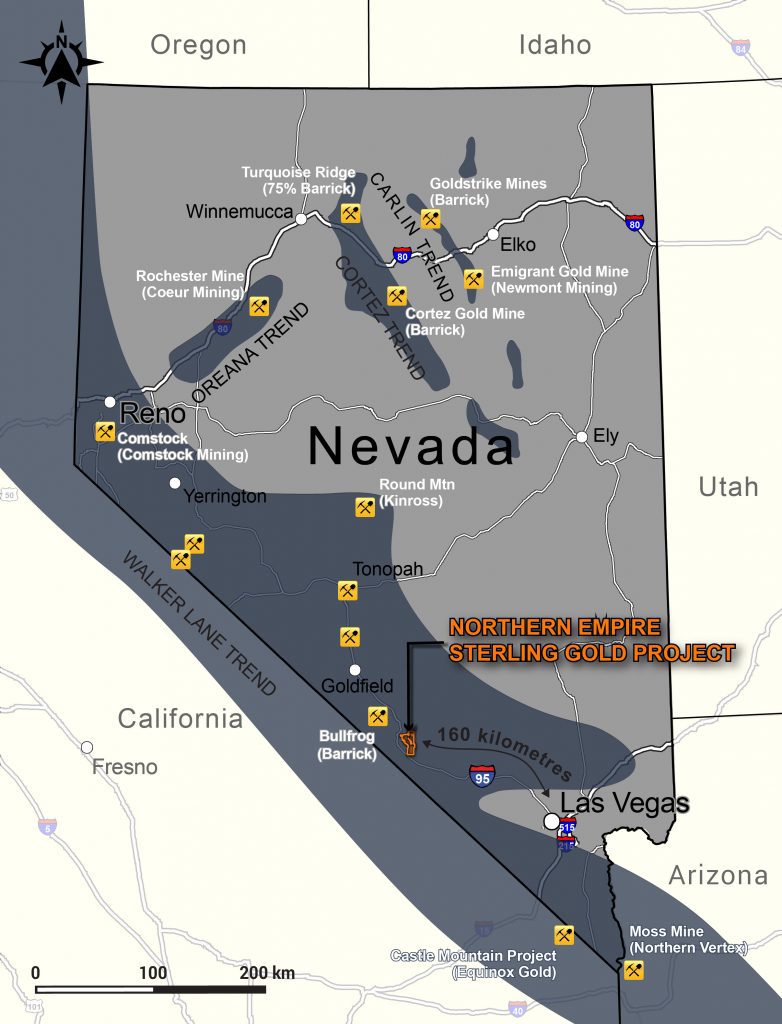 Situated 185 kilometres (two-hour drive) northwest of Las Vegas, on the eastern flank of the Bare Mountains, Sterling features five past-producing open pit and two underground gold mines. Drilling, surface mapping and sampling on the project suggests that the historic deposits are open for expansion and there is potential for new discoveries. The property still has infrastructure in place from 2015 when the Sterling Mine was last in production.

A history of success: $3B in takeout value

Along with having an outstanding property with exploration upside, Northern Empire also features a management team with an exceptional record of creating value for shareholders. Led by Executive Chairman Douglas Hurst and Michael Allen, President and CEO, the Northern Empire board has created over $3 billion in takeout value, including Newmarket Gold, acquired for $1 billion by Kirkland Lake, Kaminak Gold, acquired by Goldcorp for $520 million, International Royalty Corp, bought by Royal Gold for $700 million, Rainy River Resources, bought by Newgold for $310M, and Underworld Resources, purchased by Kinross Gold for $138 million.

Currently sitting at a $80-million market capitalization, Northern Empire has a cash balance of $18 million, having recently completed a $15 million bought deal financing that included no warrants. In fact, the company raised $35 million in 2017 with no warrants.

The gold junior is coming off a successful 2017 drill campaign and will aggressively drill known mineralized zones in 2018 to expand resources and explore for new deposits on its 125-kilometre land package.

The story of Northern Empire began in May 2017 when it acquired the Sterling Gold Project in Nye Country from Imperial Metals for $10M. The $20 million acquisition financing included an investment by global precious metals producer Coeur Mining, which earned an 11.6% stake in the company.

Between 1980 and 2000, nearly 200,000 ounces were pulled from Sterling’s three open pits and two underground mines. The run of mine ore was placed on heap leach pads, where gold recoveries averaged 88%.

Total inferred resources at the project are 709,000 ounces with an average grade of 2.23 grams per tonne gold – which is high for a deposit in Nevada where most deposits are lower-grade.

Northern Empire has all the permits required to operate the Sterling Mine. In May 2016 the mine was permitted to restart operations, with the Bureau of Land Management finding that the mine would not have significant environmental impacts.

Over the last six months the company has been aggressively expanding the property, having staked an additional 489 claims in June, thereby increasing its original land position by 50%. Another 261 claims were staked in October, which further solidified Northern Empire as the dominant landholder in the Bare Mountains, a district which includes the past-producing Sterling, 144, Daisy, Secret Pass, Gold Ace, Mother Lode deposits, and Bullfrog Mine.

Four jewels in The Crown

Exploration is focused on the Crown Block of deposits just 7 kilometres north of the Sterling Mine. For the first time the Crown Block has been consolidated in a contiguous land package under one ownership. The Crown Block hosts four primary targets: Daisy deposit, Secret Pass deposit, SNA deposit and the Shear Zone target. The mineralization follows the same East-West detachment fault structure that hosted Barrick’s Bullfrog Mine, which produced 2.3 million ounces of gold at an average grade of 3.2 grams per tonne (“g/t”).

Glamis and Rayrock previously operated the Daisy Mine, which included Daisy, Secret Pass, and Mother Lode pits, and produced 104,000 ounces of gold between 1997 and 2001. When gold dipped below $300, the mine was closed down.

A total of 160 holes were drilled at Secret Pass which was previously mined in the 1990’s. Significant drill intercepts beyond the existing pit indicate potential resource expansion. Drill hole D-320 on the eastern edge of the historical pit intercepted 1.02 g/t gold over 77.7 metres.

SNA lies on a north-south structure that hosts Carlin-type mineralization which is open for expansion. Historically 149 holes were drilled at SNA. The Shear Zone is on the upper level of an epithermal vein and indicates potential for bonanza grades at depth. Past discoveries of mineralization were not followed up on. 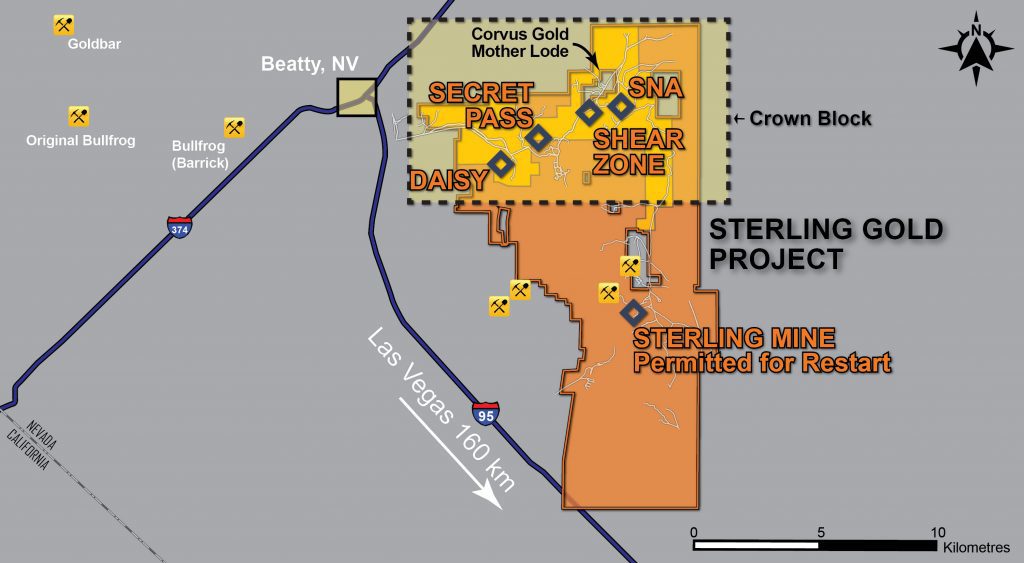 Of the planned 5,200 metres of drilling, over half was focused on the Sterling Mine, where Northern Empire outlined a pit-constrained inferred resource of 231,000 gold ounces grading 3.67 g/t. The work provided confidence in the resource, tested for extensions along strike and provided metallurgical samples prior to Northern Empire beginning economic studies.

The 52-hole drill program, 25 of which were reverse circulation holes and 27 that were diamond-drilled, started with the Daisy and Secret Pass deposits within the Crown Gold Project. The company also performed an evaluation of the entire project and flew a geophysical survey to identify new targets.

The drills then moved to the Sterling Mine to complete infill, resource expansion, and exploration drilling.

The first 24 results of the drill program were released in November. According to Northern Empire’s CEO Michael Allen:

“This round of drill results supports our resource model of the Sterling deposit, as well as the location of the underground workings. Sterling was known to be a narrow, high grade deposit with excellent metallurgy. Of note, are the occasional broader zones of mineralization, such as 12.19 metres of 8.37 g/t gold, as well as previously unacknowledged lower grade mineralization being identified by Northern Empire’s drilling; both of which may represent real opportunities within the Sterling deposit. Also, our early exploration of the area to the west and south of the Sterling deposit has yielded interesting results.”

Assay results from another seven holes reported in early December highlighted shallow, high-grade oxide gold at the Sterling Mine, with several holes hitting significant mineralization at the edges of the resource model, indicating the deposit remains open for expansion. Notable drill intercepts included 10.0 metres of 14.59 grams per tonne, 9.05 metres of 8.66 g/t, and 7.59 metres of 8.25 g/t.

As the calendar turns to a new year, Northern Empire is making plans for a 15,000-metre drill program it announced mid-December; the drills have already begun turning. In this new phase, drilling will be focused on infill and expansion of the Sterling Mine, Daisy, Secret Pass and SNA deposits, as well as testing high-priority exploration targets. Drilling will be completed with both core (diamond drilling) and reverse circulation rigs.

This area of Southern Nevada is accessible 12 months a year and Northern Empire will be aggressively working all year round. In early 2018 the company will turn its attention to the Crown Block, where drilling will begin on the SNA deposit where Northern Empire has identified the potential for a large Carlin-type deposit. This work will be targeting north-south structures exiting the Mother Lode pit, adjacent to the north and owned by Corvus Gold, and where historic drill holes such as ML088, drilled on the company’s property, returned 10.67 metres grading 4.13 g/t starting at 60.96 metres, and 28.96 metres grading 1.76 g/t starting at 100.58 metres.

Indeed an exciting aspect of this round of drilling is the close proximity of Corvus Gold’s drills on that company’s Mother Lode project, just metres away from Northern Empire’s holdings. Mother Lode produced 34,000 ounces at an average grade of 1.8 g/t in the late 1980s but closed due to low gold prices. In December Corvus announced it has expanded the sediment-hosted Mother Lode gold system to at least 450 metres along strike.

Corvus Gold’s exploration program at Mother Lode has received a major response from the market, with the stock more than doubling over the past year (+126%); most of the gain has been in the last three months and can likely be attributed to its success at the Mother Lode.

Since Northern Empire is the dominant land holder, and owns all the land surrounding Mother Lode, any extension of Mother Lode beyond Corvus Gold’s tight boundaries is likely to add ounces to Northern Empire’s Sterling Gold Project.

Drilling will also be completed at the Daisy and Secret Pass deposits with the goals of upgrading and expanding the resources, collecting metallurgical samples, and testing exploration concepts. On September 18 and October 4, 2017, the company announced drill results for Daisy and Secret Pass, highlighted by 47.24 metres of 1.47 g/t gold at Daisy and 82.30 metres grading 1.25 g/t at Secret Pass.

Northern Empire has an impressive assemblage of both past-producing gold mines and enticing exploration targets at its Sterling Gold Project in one of Nevada’s most promising gold mining regions: The Walker Lane Trend.

With the gold price powering above $1,330 per ounce, mineral-rich gold companies are rising in valuation once again, so what better time to get in on an exciting gold play that appears to offer investors ample upside? Northern Empire has the property, the treasury and the team to make it happen.

This Company is Well on its Way To Having Nevada’s Next...

NAN On The Move With New Exploration Strategy In Greenland