Despite the summer doldrums, a strong dollar, a developing trade war between the US and predominantly China, and the resulting poor sentiment in commodities and mining stocks, Kutcho Copper managed to raise decent money, necessary to fund their ongoing drill program at their flagship project, the Kutcho high grade copper-zinc project in British Columbia, Canada.

All presented tables are my own material, unless stated otherwise.

All pictures are company material, unless stated otherwise.

All currencies are in US Dollars, unless stated otherwise.

On August 15, 2018 it completed its previously announced short form prospectus offering consisting of 9.2M flow-through shares at a price of C$0.45 for gross proceeds of C$4.14M. This offering will close in two tranches, the first of C$3.6M is already closed. Kutcho Copper has arranged a second tranche, on a delayed settlement basis, with one additional subscriber for total gross proceeds of C$540k to close on or before September 30, 2018.

The offering was conducted by a syndicate of well-known agents led by Haywood Securities, including GMP Securities, Canaccord Genuity, Cormark Securities, and Macquarie Capital Markets Canada. These agents received a cash commission of 6% and warrants entitling them to acquire 480k common shares of the Company at $0.45 per share for a period of 24 months. A 6% finders fee plus warrant is decent, as it is becoming increasingly difficult at the moment to raise cash, due to negative sentiment and cannabis taking up most available investment dollars it seems, especially at a premium (18% at the time of the offering) and with no warrant like this round.

The filling up of the treasury didn’t stop there for Kutcho. The company received its second advance payment as planned on August 21, 2018 from Wheaton Precious Metals (WPM.TO) in the amount of C$4.6M under the agreement previously announced on August 10, 2017, entitling Kutcho Copper to a total of US$7M. This amount is now fully received, and is meant to fund the ongoing expenditures related to completing its Feasibility Study, like engineering, permitting, environmental work, geotechnical work, etc.

“We have been making good progress in the field the past few months advancing the project towards Feasibility. Geotechnical and metallurgical drilling is almost complete, resource expansion drilling has commenced and environmental baseline studies have been progressing smoothly. The recent financing coupled with Wheaton’s payment gives the Company the capital towards continuing its goal of completing the planned Feasibility Study in Q2 2019.”

As a reminder, resource expansion drilling has commenced 2 weeks ago, and will be completed at the end of September/mid October of this year. The FS data collection is on schedule and is also expected to be completed mid October. The company is looking to complete their field season before the winter break (starting at the end of October) which would make everything more expensive, and according to management they are on schedule. In the mean time, management acknowledged the issues that several companies had when applying for permits in BC (Taseko, KGHM), and has chosen to take a different  road. This resulted in very good working relationships with supportive First Nations, and the company is working together now with the same bands with whom VP Community & Environment Sue Craig  already reached agreements with at another, much larger project.

Although everything seems to be running smoothly and is managed very professionally, with a profitable (post-tax IRR of 28% @$2.75/lb copper, @$1.10/lb zinc) project that has a post-tax 2017 PFS NPV8 that is 15 times bigger than its current market cap, investors apparently don’t all seem to appreciate the quality and progress being made, and might still need to be made more aware of Kutcho Copper, as the share price drop was much more than justified based on negative mining stock sentiment and metal prices alone, as more well-known peers like Trilogy, NGEX and Nevada Copper lost (a lot) less during the summer:

As it seems the Kutcho share price has found support now, and the market cap has come down to less than half the amount of cash in the treasury after the closing of the most recent offering, the buying opportunity for new investors is pretty good at the moment, and I am considering averaging down as well. I believe a second opportunity could present itself during tax loss selling season, which usually puts pressure on stocks that have come down a lot during the year, and basically transpires between mid November and mid December until the holidays. However, it is also very well possible that Trump reaches an agreement with China on trade tariffs before mid December, and commodity/mining sentiment could turn fairly quickly by then, and a rising tide lifts all boats.

A quick update on metal prices: the copper price finally seems to consolidate at the $2.70-2.75/lb Cu levels, as potential copper mine strike issues (Escondida) and ongoing salary negotiations with other large LatAm mines seem to be dwarfed by China trade war concerns, which might be more or less contained by now for the time being: 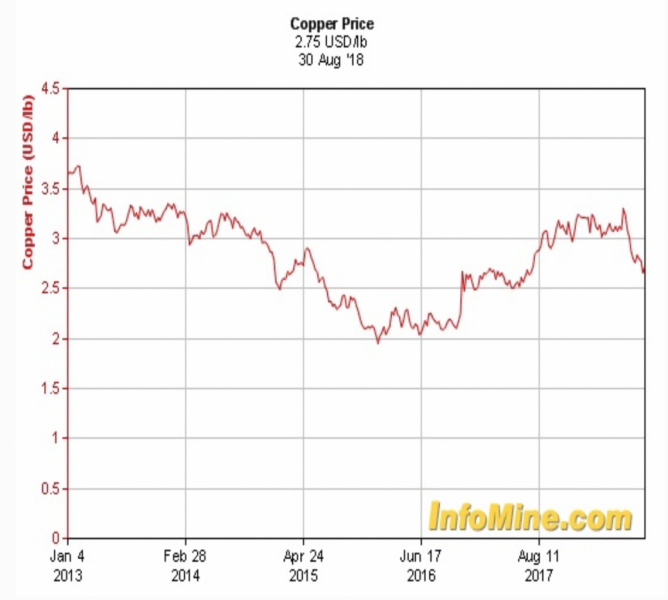 The fundamentals for copper are still very strong for the next 3 years, with a 5-10Mt deficit expected by 2021. But we are not out of the woods yet, depending on Trump’s goals and agenda. My belief is he will keep looking at the almighty US stockmarkets, and more or less like the Fed, will determine his policies by probing and testing his ideas, and watch very closely what the effects will be on the stockmarkets.

Zinc is developing/behaving differently, as it is less fragmented as a market, warehouse inventories have impact, smelters have even more impact on pricing and basically control the zinc market anyway. Since the LME inventories recovered from 150kt to 250kt in a matter of weeks, and the trade war eroded metal sentiment, the zinc bull market seemed to be over:

It can be seen that the low in LME levels coincided with the peak in the zinc price, although there is no direct correlation between LME levels and zinc price: 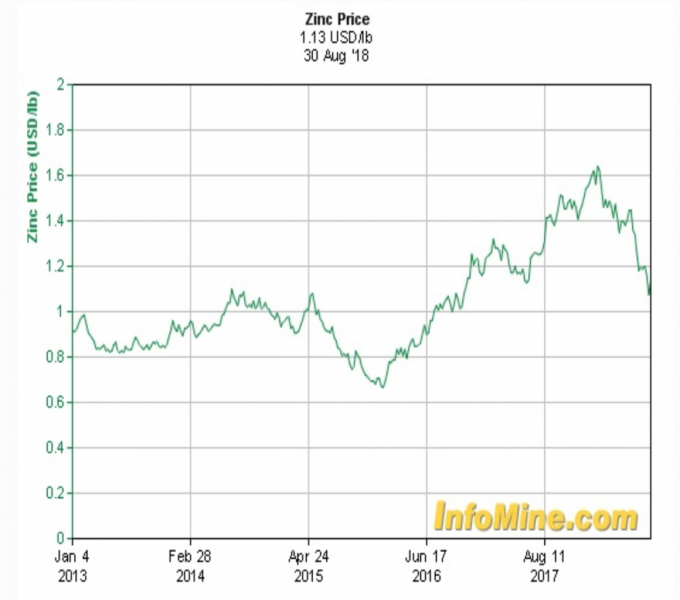 At a zinc price of $1.13/lb, it will be clear that only very robust zinc projects will be of interest for financiers/potential suitors. The Kutcho project is very robust with a conservative base case zinc price of $1.10/lb, and it can go much lower before the post-tax IRR drops below 18-20% which I consider a threshold for capex financing for this relatively small sized base metal project. Many zinc projects are losing economic profitability now as their base case zinc prices are above current metal prices, and will have a hard time arranging capex or finding a suitor in the near future, as these are probably looking at a long term zinc price of $1.00-1.10/lb now, as they usually discount current metal prices by 10-20% to have a safety margin.

The Kutcho project isn’t losing any profitability at the moment as the base case metal prices were set at today’s prices. It is very rare to see this happening for a base metal project these days, and shows the strength of its economics. And this is just the first stage as investors familiar with the story know. Management is looking to double the tonnage through the ongoing exploration drill program, which could, combined with other measures, generate total tonnage in the realm of 20Mt. Other opportunities are improving recoveries of copper and zinc, FX rates, higher metal prices and further optimization of for example mine plan and opex.

I don’t expect the NPV8 to double instantly on doubling tonnage, but it will most likely increase significantly, and Kutcho Copper will turn into a deep value play even more, as C$265M is 15 times current market cap, C$404M is 22 times market cap, and C$499M is 28 times market cap. There is, to my knowledge, no other project with such a big dislocation between market cap and (current and future potential) NAV, such a profitable base metal project, so cashed up and so backed by a very strong strategic partner which has a clear interest in bringing this project into production. And it also has its brand new blockchain initiative MineHub, backed by a syndicate of large companies, which could add value further on. At some point in time a re-rating seems almost inevitable in my opinion, if the company keeps delivering like it does.

I hope you will find this article interesting and useful, and will have further interest in my upcoming articles on mining. To never miss a thing, please subscribe to my free newsletter on my website www.criticalinvestor.eu, in order to get an email notice of my new articles soon after they are published.

The author is not a registered investment advisor, currently has a long position in this stock, and Kutcho Copper is a sponsoring company. All facts are to be checked by the reader. For more information go to www.kutcho.ca and read the company’s profile and  official documents on www.sedar.com, also for important risk disclosures. This article is provided for information purposes only, and is not intended to be investment advice of any kind, and all readers are encouraged to do their own due diligence, and talk to their own licensed investment advisors prior to making any investment decisions.