By Gwen Preston, The Resource Maven

EMX Royalty is a big story, which means it’s hard to sum up the investment rationale concisely. But I have liked – and owned – this company for years and it is today in the best spot I’ve ever seen in terms of clear upside potential.

So it’s time to try for the concise explanation!

EMX is a big story because its portfolio has several parts: projects, royalties, and strategic investments. There are dozens of holdings in each and the categories overlap like a Venn diagram.

The company started as a project generator, which means it identified and acquired prospective geologic ground, did enough work (mapping, sampling, geophysics, data compilation, and the like) to define enticing drill targets, and then found partners to spend the money to drill while earning ownership of the project.

It’s a good business model but EMX is a very busy group, which means it partnered out dozens of projects annually. To keep a stake in each asset would have left the company with a slew of project stakes, each requiring cash from EMX as the project advanced.

One of the key reasons I like EMX are the people. The team is highly proficient technically – but these guys are also entrepreneurs. Their business minds realized the market wouldn’t grant them much value for that kind of portfolio. So they amended their approach.

Rather than keeping stakes in projects, EMX switched to only retaining royalties. As such their project generator machine is actually an organic royalty generator. That said, it’s important to note that project deals give EMX more than a royalty on an asset that’s ages from production, if it ever gets there – EMX also gets cash payments while the partner earns in, advance royalties between earn-in and production, and shares in the partner co.

Two years ago the company rebranded as EMX Royalty, to reflect the altered focus. And the change really matters: the market gives royalty companies strong valuations per ounce or dollar produced because their production is so inexpensive. So it makes good sense that EMX wants to convey very clearly that it is a royalty generator, not a project generator.

So EMX has a portfolio of royalties. Most are organic, which means EMX identified the project and retained a royalty on vending it out. But the cash that EMX gets from project payments, advance royalties, and cash-flowing royalties means this team has the ability to buy things as well, and so it has strengthened its royalty portfolio by buying royalties when good opportunities presented. The royalty it holds on part of Newmont’s Leeville mine in a prime example – EMX bought the royalty in 2012 and it generated several million dollars in cash for the company each year.

That’s the royalties side. EMX also has projects, of course. The team is constantly working to identify new projects that it can acquire, advance, and then partner out. The bear market was a boon in that regard – EMX restocked its portfolio by picking up projects that zombie juniors had to relinquish.

Its organic efforts have defined 30 properties that are currently available for partnership and 46 projects with partners. Three of those projects are getting close to production; one is in production. 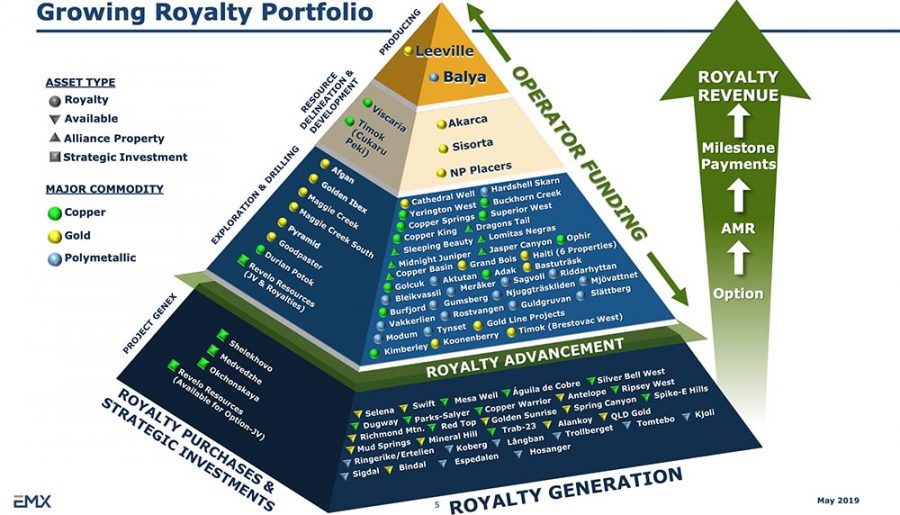 The other stream feeding EMX’s portfolio is strategic investments. This too is possible because this team is entrepreneurial and driven by finding undervalued, under-recognized opportunities. The Malmyzh project in Far East Russia is the obvious example.

Seven years ago EMX realized that a tiny company called IG Copper had managed to get its hands on 51% of a massive project in Far East Russia that was littered with porphyry potential. Freeport McMoRan owned the other 49% and IG Copper needed help coming up with funding and expertise to move the project along. Enter EMX. EMX invested in IG Copper and provided advice, repeatedly, for seven years. That all paid off earlier this year when the Russian Copper Company bought Malmyzh and EMX got a $90-million payday.

It was a five-fold return on capital in seven years, on a project in a jurisdiction most companies wouldn’t touch. Incredible.

The feat means EMX now has $86 million in its bank account. That is more money than the company has ever touched, by which I mean it’s more than the combination of all its financings, all the payments it has received from partners, and all the royalty income it has banked.

What does an $86-million bank account mean for EMX?

Executing on Malmyzh should have given the market a whack on confidence in EMX’s deal prowess…but ironically the company has a significantly lower enterprise value today then it did before the big payout. Enterprise value is market cap minus cash; EMX currently has a market capitalization of $122.6 million but has $86 million in the bank, which means its team, projects, royalties, its entire business is being valued at just $36.6 million. That is crazy low. Part of the reason has nothing to do with EMX: malaise across the mining sector. EMX sent me over the chart below indexing its share price against the TSX Venture Index. While it might feel like EMX’s share price hasn’t been doing much, in fact it is up 150% since the start of 2016 – during which time the Venture index has been completely flat. 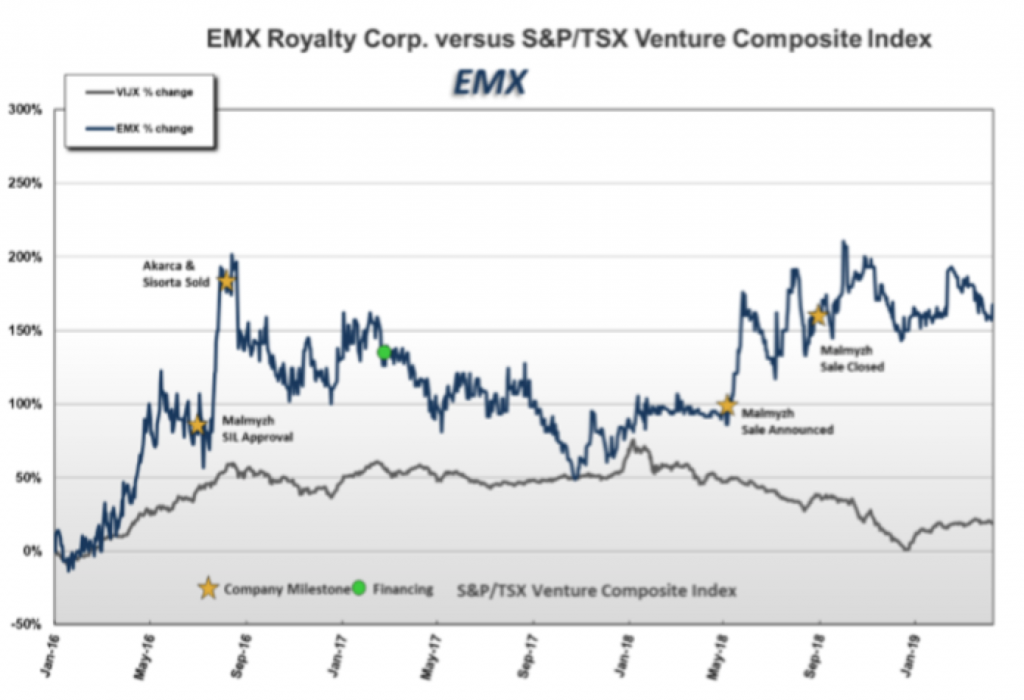 Despite those gains, I think EMX is undervalued. That said, it’s one thing to think a company is cheap but it’s another thing to think there is a near-term reason for it to gain. With EMX, I do.

For one, the company is working very hard to deploy some of its capital. The team has been assessing royalty opportunities around the world and across the commodity spectrum. I think it’s just as likely EMX signs a royalty deal on an unusual commodity, like phosphate or mineral sands, as it finds one on gold or copper. This team is on the hunt for value and will consider any commodity. As president Dave Cole said to me the other day:

“If I look for the same thing everyone else is looking for, it’s hard. So I’ve always believed in throwing a broad net. And we’re experienced in navigating that broad arena. Remember we’re the guys who were first going to Serbia, who went to Haiti, who went to northern Europe when no one was there – and we did well in all of those ventures. So yes, we’re looking both without and outside the main fairway of our industry.”

This team has a 16-year track record of deploying capital really well. Put that team together with a big new bank account and I think you have a good upside opportunity.

I am not the only one who thinks so, which brings my to point two. EMX’s trading float keeps getting tighter. A slew of smart investors are long and have been carefully buying stock when it becomes available. Between these investors, a few funds, and management – EMX knows where most of its shares are and knows that most will not be up for sale until the share price is well north of where it sits today.

I can’t guarantee how the market will react when EMX announces a royalty deal. There are naysayers to everything and so I’m sure some will shoot down whatever deal Cole closes.

However, Cole and his team are some of the best in the industry at understanding value (current and future) and spotting opportunity. The bank account and the opportunity it creates for EMX to add significant value plus the lack of available stock – I think it makes EMX a strong buy at these levels