The initial drill results from the Sandman gold project in Nevada were successful at confirming that the high-grade mineralization at Abel Knoll continued at depth and confirming the grade, width and continuity of high-grade gold zones at North Hill. Drilling is ongoing. News Releases | Gold Bull Resources

Gold Bull Resources is a development-stage junior mining company which has acquired promising properties in some of the most prolific gold trends, and in perhaps the most mining-friendly jurisdiction in the world, namely the Northern Nevada Rift and the Carlin Trend in the state of Nevada. Moreover, the company is led by an experienced and shareholder-oriented management team with a successful track record — particularly, CEO Cherie Leeden and VP David Johnson, both proven mine finders who have worked together on and off for the past two decades. Gold Bull’s technical team is further supported by Lindsay Craig, the firm’s exploration manager, who has played a key role in five previous multimillion-ounce gold discoveries.

Located just 23 kilometers (km) from the Sleeper mine, which produced 1.7 million ounces of gold at an average grade of 7 grams per tonne (g/t), Gold Bull’s 100%-owned Sandman project lies on the Western Northern Nevada Rift. See Figure 1. The Northern Nevada Rift (NNR) is a well-known gold trend both in Nevada and worldwide (see pages 5-6).  Sandman encompasses a huge land mass, 145 square km, and is located 24 km northwest of Winnemucca, Nevada. (Gold Bull’s land position reflects 28 square km it acquired in late January 2021, as it staked and secured 388 additional mineral claims.) The company purchased Sandman from Newmont Corporation (NYSE: NEM) for US$4 million in a transaction which closed in December 2020. 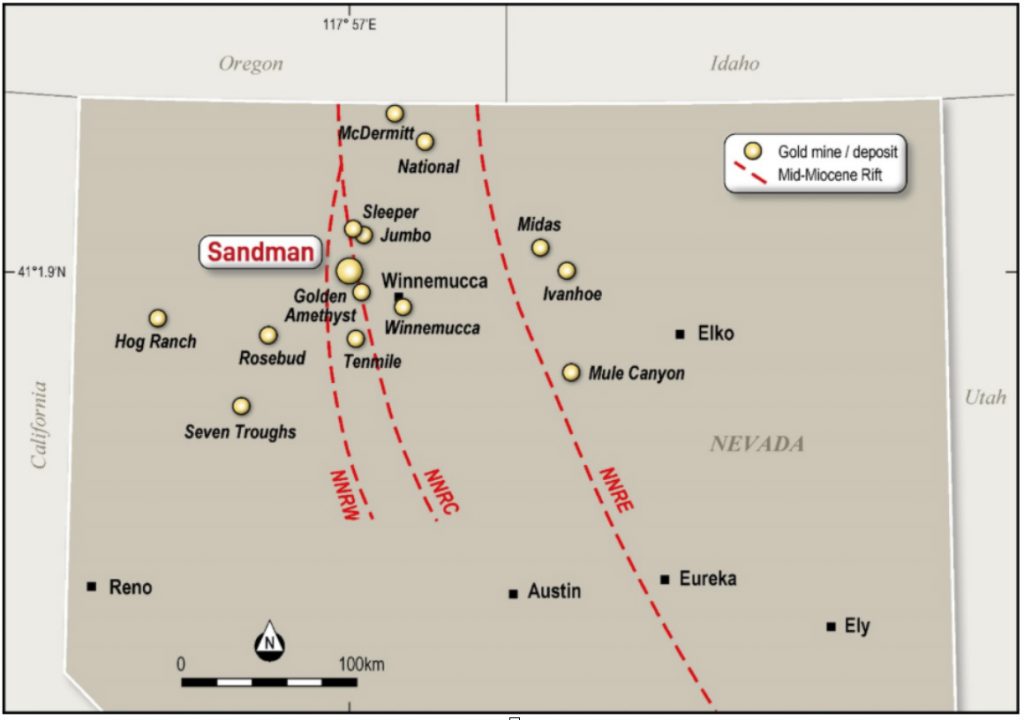 Past owners of Sandman executed only limited drilling programs on the property, and most of the holes reached depths of less than 100 meters, even though Sandman’s geological characteristics suggest that gold could be found at depths of up to 500 meters. Most of the drilling activity was performed 25 years ago or earlier.

Gold Bull completed a ground geophysics program at Sandman in January 2021 and plans to commence a 3,000-meter maiden drill program over a two square-km area this quarter.  Seventeen holes are scheduled to be drilled, each reaching a depth of 70 to 250 meters.  Target areas include Silica Ridge, SE Pediment, North Hill, and Abel Knoll. Impressive intercept data has been recorded in each region from prior drilling programs. For example, Figure 2 shows selected previous assay results at Silica Ridge, as well as a depiction of its potential cross-section. 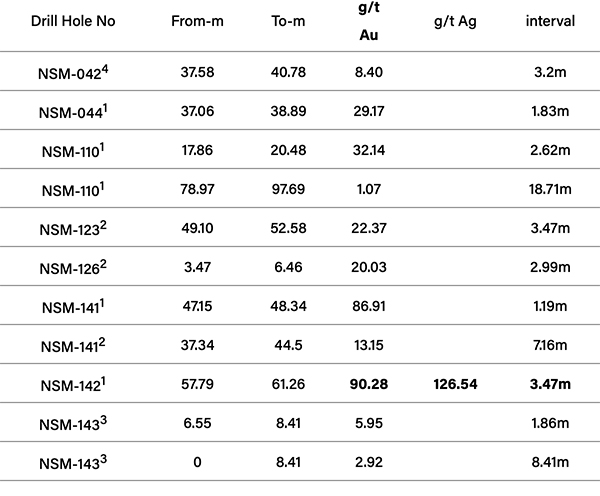 Similarly, in the Abel Knoll region, assay results from the historic drill hole AK06-023 is very encouraging. Perhaps even more important, the hole ended in highly mineralized rock. Figure 3 lists a few of the AK06-023 assay results, as well as an illustration of the Abel Knoll cross-section where AK06-023 was drilled and the location of the proposed AK21-001 hole. That hole will test the extent of the high-grade gold mineralization uncovered by AK06-023.

On February 2, 2021 Gold Bull released a constructive update of Sandman’s resource estimate. An independent consultant now estimates the property contains 494,000 ounces of gold (on combined indicated and inferred bases). This figure, which represents a 60% improvement on a 2007 projection of 309,000 ounces (also including both indicated and inferred estimates), reflects drilling results from drilling programs executed since 2007.  See Table 1.

The NNR is a geologic feature which hosts many high-grade gold mines. The trend is a 30 km-by-500 km, north-northwest (NNW)-striking magnetic anomaly with rocks structures from the Mid-Miocene Epoch (16 million to 11.6 million years ago). Precious metal deposits in the NNR are generally high gold-grade epithermal deposits (see page 5) which contained one to five million ounces of gold. Ore has been hosted in NNR epithermal vein-filled faults and has been found as deep as 500 meters below the surface. Examples of high-grade NNR deposits in Nevada are Midas, Hollister and Fire Creek. See Figure 1.

Metals are formed by partial melting across rocks at depth. The melt rises through the crust and cools. Minerals with little value like feldspars are “discarded” along the way, and valuable metals are concentrated in the remaining magma, or hydrothermal fluid.  Epithermal precious metal deposits form within 1,000 meters of the surface of the earth’s crust. See Figure 4.

In December 2020, Gold Bull acquired the Coyote Project in western Utah, an early-stage precious metals development project, from a private company for annual payments of US$50,000, which converts to a 3% net smelter return (NSR) upon production. Gold Bull reported assay results from a previous dump sample of a high concentration of precious metals: 12.25 g/t of gold, and 5,570 g/t of silver.

Gold Bull began a geological mapping, soil sampling and ground geophysics program on the property in January 2021. A maiden drilling program is expected to commence later in 2021.

Also located in Nevada, Gold Bulls’ Big Balds Project is 10 km west of Kinross Gold Corporation’s (NYSE: KGC) operating Bald Mountain Mine, which boasts a 5-million ounce gold resource. That mine produced 188,000 ounces of gold equivalent in 2019 and had nearly 1.3 million ounces of proved and probable gold reserves as of December 31, 2019.  See Figure 5.

Equally important, Gold Bulls’ Big Bald property sits in the prolific Carlin trend. Carlin-type gold deposits are sediment-hosted gold deposits. These deposits, which comprise a major portion of the gold production and reserves in the U.S., are characterized by extremely fine-grained disseminated gold hosted by pyrite and arsenopyrite, and can be discovered only through chemical analysis.

According to Geology for Investors, Carlin-type gold deposits comprise about 9% of the world’s gold production. The deposits are generally low grade, but open pit mining and extraction via the low-cost heap-leach method make the deposits economic. The Carlin Mine in Nevada represented the first large deposit of this type. Similar deposits in the state are said to be along the Carlin Trend. See Figure 6.

Gold Bull raised $13.8 million from the sale of common shares and warrants in December 2020. Accounting for this inflow, as well as the December 2020 payment of US$4 million to Newmont Corp. for 100% of the Sandman property and US$1.3 million for environmental bonding of Sandman, the company has about $5 million of cash and no debt. Current shares outstanding are about 67.1 million (96.3 million on a fully diluted basis). See Table 2.

In Table 3, we compare the valuation of Gold Bull to a group of a group of developmental-stage junior mining companies which are focused on Nevada properties. 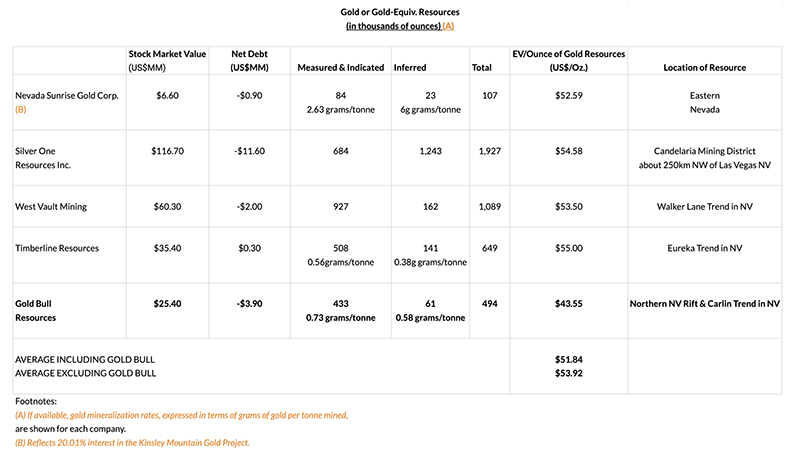 Two key observations on the data displayed in Table 3 are:

Gold Bull is led by CEO Cherie Leeden and Chairman Craig Parry. Ms. Leeden has 20 years of experience as an executive in the resources sector, including 10 years as a board member of public mining companies. Mr. Parry likewise possesses 20+ years of experience in the resources sector as an exploration and business development geologist. He was also the founding partner of the mining- and resource-focused private equity firm EMR Capital.  Mr. Parry and Ms. Leeden go back almost 20 years, when they worked together at Rio Tinto.

Gold Bull owns three gold properties with substantial exploration potential, including two located in world-renowned mining trends. In particular, the flagship Sandman property in the NNR has been lightly explored, particularly at depths below 100 meters. Sandman’s gold resources remain open in numerous directions. Gold Bull commenced the maiden drill program focused on deeper holes in the first half of this year. In early February 2021, an independent consultant increased the estimated mineral resources at Sandman by 60% over the prior projection, based on incorporating the several hundred additional drill holes that were drilled by Newmont subsequent to the previous 2007 resource estimate. If Gold Bull’s drilling programs are successful, it is possible that Sandman’s mineral resource estimate could be boosted again in the future.

Gold Bull trades at about a 17% discount to its Nevada-based junior mining peers when measure in terms of EV-to-estimated mineral resources. As the company executes drilling programs to explore the Sandman Project, particularly at greater depths, it is possible that the property’s estimated contained gold ounces could increase. In turn, this would imply that Gold Bull stock trades at an even greater discount to similarly positioned companies. In addition, given the finance world’s high current level of interest in the gold and other precious metals markets, any announcement of constructive Sandman assay results could be warmly greeted by investors.