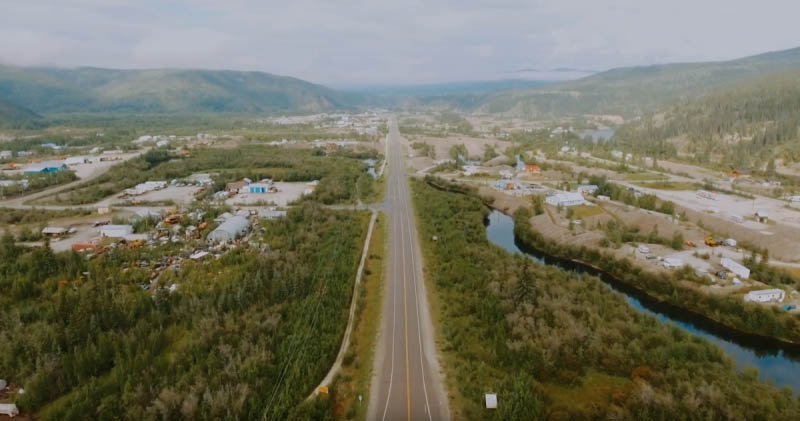 Klondike Gold completed the 2018 drill season with 87 holes and will likely be receiving assay results right into the New Year. With a wealth of information still expected from the lab, Resource Opportunities editor, James Kwantes had an opportunity to take in questions from investors and put the company to task getting the truth behind the numbers.

Message from Klondike Gold: Due to the overwhelming response we ran out of time to address some important questions so we encourage you to read our written responses below

The issue will be more about the profit margin. Let’s imagine 1 g/t gold in 33 million tonnes of rock, (so 1 M oz Au) sitting on the moon. It is not profitable because it will take a space program costing $$Billions to get to it and extract it; therefore, breakeven would be $$infinite or not economic. Now let’s imagine the same 1 g/t gold in 33 million tonnes of rock sitting next to power, easily accessible, basically everything is simple with no space program required. 1-gram of gold is worth about $50 CDN today (at $1600 per oz CDN), so if it costs $15 CDN per tonne in mining costs that is 0.3 g/t Au – that would be breakeven, and any grade above 0.3 g/t Au could be profitable. The higher the grade, the better of course. Most Yukon economic assessments use ~0.3 g/t Au as a grade cut off. Kaminak used 0.27 g/t Au, as did Victoria Gold.

Are we discovering commercially minable/economic grades?

Maybe; we will see. We don’t know what the average grade at Lone Star Zone is yet. We will get a better idea when we receive the rest of the 2018 pending assay results (30 holes left to be received  at Lone Star). At Lone Star, we have identified 3 kilometers of gold mineralization and drilled up to 900 meters at 50-meter spacings. This information will provide an indication of what grades could be. It appears Nugget Zone has higher grades than Lone Star, and we will know more about the grade there by the end of this season as well. In addition, we have areas of much higher grades, like at Gay Gulch with 76 g/t Au over 2.8 meters etc etc. Commercially mineable grades, and economics, will first require a resource with an average grade, and then we can apply economic metrics to it. We can begin to ballpark and guess, but we aren’t anywhere near figuring out what is economic yet.

There are many factors that influence the economics such as operational costs, proximity to a town, services or people, the depth of the deposit and drilling costs, gold price, metallurgy, etc.

We now know that ALL rock types host gold, and we know that they all host gold differently. So brittle, competent, hard rocks – like our “felsic” – just shatters and has high grade quartz veins only. The “intermediate schist” seems to be porous and permeable and has disseminated gold with a few quartz veins. The “mafic schist” has less gold generally; it doesn’t usually like to break to form a quartz vein and it isn’t porous or permeable so doesn’t have much disseminated gold.

The gamechanger is the presence of units that have gold scattered evenly through them across broad widths, sitting at surface. Here we can potentially outline quickly any gold ounces with short drill holes testing systematically, which is ideal for deposit delineation. The high-grade quartz vein zones are sporadic, hit and miss, and difficult to drill because they are not evenly spaced, and are confined to narrow widths, and may not start at surface so are difficult to find in the first place.

It was too soon to tell at the beginning of the year, but after completing structural and lithologic mapping, and prospecting, and other surveys in 2018, we have a far better idea of what is possible and where to look for each of the units and have an idea of what type of gold we might find there before we look. So yes, it is a game changer.

How many drill core samples are yet to be reported?

30 drill holes released with 57 left to be reported. Plus, the compilation mapping, soils, district surveys still to come too; although they are probably better understood once the drilling results are all reported.

Do you have a target date for your first resource?

We are hoping to have a maiden resource in 2021, based on drilling completed in 2020 which allows time to get all the assays and then have an independent estimator do the calculations. But a resource wouldn’t be useful if there isn’t any gold in it, so we are presupposing we can identify and quantify enough ounces to make it worthwhile. Remember at this point we have not done a resource estimate and all this is conceptual in nature.

Our strategy is very much like Kaminak. Remember we are directly outside Dawson and our drill costs are a fraction (<30%?) of what it cost Kaminak to drill the equivalent hole, and it takes less time too. Our property size is slightly larger than Kaminak’s. Rather than drill the entire property, we are focussing on 2 zones (Lone Star and Nugget) which we think holds sufficient gold so it won’t take 10 years. I agree; our backers don’t want 10 years for sure. We are hoping, if results warrant, to have a maiden resource by 2021, and if yes by then we would still need much drilling so five more seasons is a probably realistic timeline. The image below shows both Klondike’s and Kaminak’s geology, which gives you an idea of both the size and geologic similarities between the two properties. 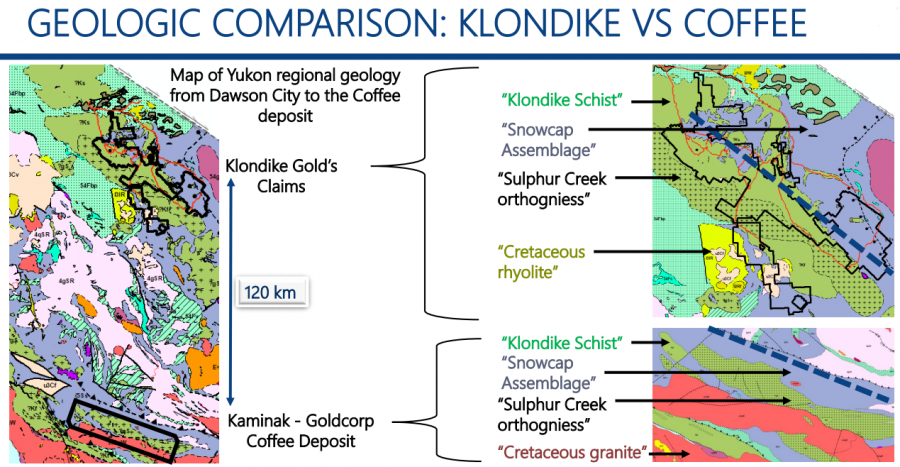 Assuming drilling is funded for 1 more year what should shareholders expect in terms of longer-term financings? More dilution is the default?

Junior companies do not ‘make’ money because this is not a revenue business. The job is to raise money each year from investors and then spend that money as quickly as possible. Each investor who hands money to a junior wants it used immediately to drill the “monster” hole – the best possible return on investment. Once spent, usually in the same calendar year, the process begins again for the next year and dilution is a requirement. The objective is to find as much gold for as little money in the least amount of time possible. Since it takes lots of money spent over years of time to find and define anything of substance, dilution is unavoidable.

How much money in the bank and how far will it take you? Will you have to raise more money before you calculate your first resource?

$3.1 M cash now. It should take us through 2019 with a $2.5M exploration program and $500k corporate G+A. Subject to positive results from remaining 2018 exploration program, I would consider $2.5M as a minimum and would like to accelerate it to perhaps $4M or $5M. Which would need a money raise. We could wait a bit into 2019, and see how the gold market responds, and we are already considering how much $$ and when to raise to fund 2020. We are hoping, subject to positive results, to have a resource in 2021 based on the results from funding described above.

A theoretical alternative is to strike a deal with a large miner for $100 per found ounce, an advance, and a true-up for a sale in 2 years with more gold ounces found?

The majors won’t pay $100 per ounce until drilling, metallurgy, resource estimate, preliminary economic assessment and probably permitting and environmental base line studies are completed or at least underway. The better quality it all is, the more is paid up to around $100/oz. We are a long way from that amount of information to get to a point where a serious conversation with a major could begin.

Since we have access to capital, KG doesn’t need to partner with a major at this early stage, and we wouldn’t get much for it now if we did.