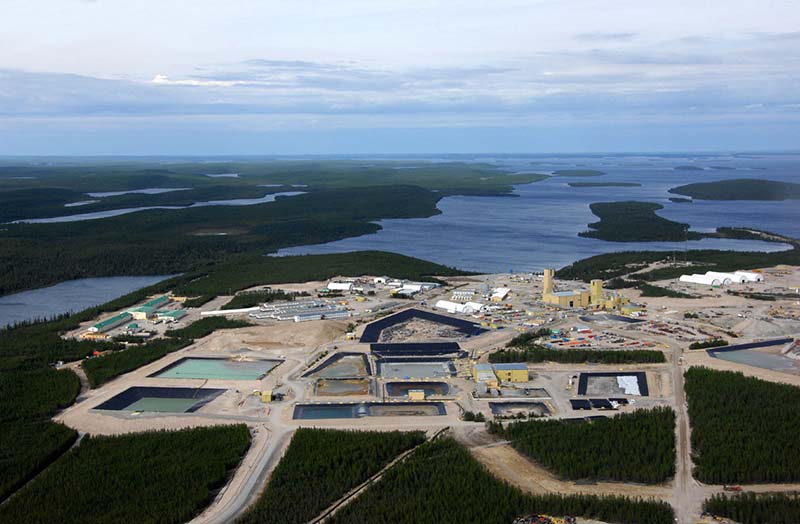 Uranium prices have trebled to its highest levels in more than two-and-half years as big producers of the nuclear fuel may make further cutbacks and China is charging forward building 18 new reactors. Data from the World Nuclear Association shows that 55 reactors with a capacity of 55 gigawatts (GW) are now under construction worldwide.

In a bold move to cut supply Cameco Corp. (TSX: CCO), the world’s largest publicly traded uranium company, instituted a series of mine closures and opted instead to buy in the spot market to fulfil long-term sales contracts.

Contrarian investors Goegring & Rozencwajg have been watching one of the best performing commodities of 2018 rise almost 40 per cent from its April lows.

According to Goegring & Rozencwajg, natural resource investors, Cameco would be 24 mm lbs. short in its ability to fulfill contractual supply agreements. The company said approximately 15 million pounds of uranium would come from their own stockpiles, but that at some point they would have to enter the physical spot market to purchase an additional 10 million pounds in order to meet commitments. The physical spot uranium market is extremely small (estimated by analysts to be only 10 to 20 mm lbs.), so any supply taken off the market will have an effect on supply and prices.

Supply concerns have renewed interest in uranium exploration with several companies closing recent financings and project acquisitions. The sector is looking up as the market thought they were dead in the water this past summer.

These companies represent a lot of experience in what is turning out to be one of the premier uranium mining camps in the world. The Athabasca Basin is host to Camecos’s operation and the growing NexGen Energy Ltd.’s (TSX: NXE) Arrow uranium discovery.

Jordan Trimble, President and CEO of Skyharbour Resources has acquired 200,000 hectares throughout the Athabasca Basin, and he’s joined us today with Alex Klenman, President and CEO of Azincourt Energy for an interview to provide their insights into the uranium market and the renewed interests in uranium explorers and developers.

What sparked the renewed interest in the uranium markets?

Jordan Trimble “JT”: The uranium market has recently shown notable signs of recovery with increasing uranium prices and improving sentiment, and this recovery appears to be accelerating amid recent news and several sector developments. The demand side continues to grow and Japanese nuclear restarts have recently accelerated.

On the supply side, mine closures and production curtailment continue to dominate headlines. The two largest producers, Cameco and KazAtomProm, have announced large supply cuts in 2017 and 2018 including Cameco’s suspension of operations at the world’s largest uranium mine, McArthur River, as well as KazAtomProm’s announcement that it will cut 20% of planned production over the next three years as well as another six-per-cent production cut over previous expectations. A new uranium holding company called Yellow Cake Plc.(LON: YCA) raised US $200 million in a London-based IPO and has bought 8.1 million lbs of uranium from KazAtomProm representing a significant portion of the uranium spot market.

There has also been recent talk that current producers are more likely to buy larger quantities of material from the spot market going forward including Cameco announcing it would buy 11 to 15mm lbs in the spot market through 2019 which should add upward pressure to the uranium price.

What should investors look for as a sign or indicator that the markets are responding to improving fundamentals?

JT:The are several indicators including the price of the commodity (and there are several prices) as well as the equity valuations of the uranium mining companies. When looking at the uranium price, there is the spot price which is a good gauge for the current trading price of the commodity and for identifying price trends. There is also the long-term price, or the “contract price”, which historically is where most uranium has traded as these contracts are entered into between utility fuel buyers and uranium mining companies.
This is where most of the end users of uranium, nuclear plants, purchase their material and is usually the price equity analysts use in their research. Worth noting is both the spot price and contract price have been ticking up recently (spot price up from $21 / lb earlier this year to $27 / lb).

Equity valuations have started increasing as well but there is still a lot of room to move as they are coming off of near record lows over the last few years. Other important indicators include the new financial buyers coming into the market (Yellow Cake and Tribeca), supply cuts (such as the Cameco and KazAtomProm curtailments), reactor restarts in Japan and new plans for additional reactors to be built.

Uranium investors waited ten years since the last bull run. We’re not back there yet but prices have certainly recovered off the bottom. Are you seeing investor sentiment rise and attention returning to the Athabasca Basin?

Alex Klenman “AK”:Yes absolutely.  Juniors are raising capital and sentiment is most definitely trending in the right direction.  Analysts and researchers have been on to the supply-demand scenario for several months now, and these fundamentals are finding their way into the buy-side “inbox” so to speak.  Athabasca is ground central for high-grade uranium, it’s simply a very unique geographical location, an almost perfect storm, geologically speaking. Investors realize the significance of working there.  If you’re elephant hunting, you go to where the elephants are.

How many major discoveries have there been in the Athabasca in the last decade or so?

JT: Over the past decade, we have seen a number of notable discoveries in the Athabasca Basin. The most notable of which was made by NexGen Energy, at their Arrow deposit (25 kilometres away from Skyharbour and Azincourt’s East Preston Project) where they have hundreds of millions of lbs of uranium at a high grade and boast a $1B market cap.

Other notable discoveries include Denison’s Phoenix and Gryphon deposits at the Wheeler River Project, Fission’s Triple R deposit (less than 25 kilometres away from the East Preston project) at the PLS project and the Roughrider Deposit which was the basis for Rio Tinto buying out Hathor for $650M in 2012. These are just a few of the notable high-grade uranium discoveries in the Athabasca Basin over the past decade.

AK: Nuclear power has never really gone away.  Black swan events like Fukushima, for example, put a lot of things on the back burner and more than anything cast a shadow over the sector.  As technology improves, so do safety standards, which really is the great fear associated with nuclear energy. We have come a long way in the last two decades.  Currently there are about 450 nuclear power reactors operating worldwide and another 50 under construction.  Right now, 11% of the planet’s electricity is generated by those 450 reactors. Another 100 reactors are in the planning stages, and about three times that amount are in the proposal stage.  Those stats say we’re headed towards expansion, not contraction.

The Athabasca Basin was always crowded but can you tell us more about what’s heating up around your East Preston project?

AK: Azincourt is in a great location.  We are surrounded by billions of dollars in market capitalization.  Cameco, NexGen, Orano, these are massive companies. And right there in the middle of all of that, with a substantial land position, is little Azincourt.  The JV with Skyharbour and Clean Commodities has given a micro-cap like us an opportunity for meaningful discovery, and ROI, in one of the world’s most exclusive uranium addresses.

The most significant development nearby is Orano (formerly known as Areva), a billion-dollar uranium company, will be drilling their JV with Skyharbour, the Preston project.  They’ve announced a $2.2-million exploration program that includes over 4000 meters of drilling. Orano has identified 21 drill targets on the JL Grid, which is quite close to the corridor on our western boundary. We are earning a 70-per-cent interest the eastern portion of the Preston project, about 25,000 hectares.  Both companies will be drilling at about the same time.

Ok, you’re definitely in the right neighbourhood. Please share with our readers more about the results you had last year at East Preston and your objectives for the upcoming season

AK: Last February we completed a winter geophysical exploration program that generated a significant amount of new drill targets at East Preston.  Technically speaking, and this is always tough for most retail investors to digest, but we identified multiple long linear conductors with flexural changes in orientation and offset breaks in the vicinity of interpreted fault lineaments.  These are classic targets for basement-hosted unconformity uranium deposits. These are not just simple basement conductors but are clearly enhanced “must drill” targets because of the structural complexity.

These targets are similar to NexGen’s Arrow deposit and Cameco’s Eagle Point mine.  East Preston is near the southern edge of the western Athabasca Basin, where targets are in a near surface environment without Athabasca sandstone cover.  They are relatively shallow targets but can have great depth extent when discovered.  The project ground is located along a parallel conductive trend between the PLS-Arrow trend and Cameco’s Centennial deposit.

So, at the risk of speaking in general hyperbole, I don’t think it’s a stretch to say we have all the right stuff, in precisely the right place, at what looks like, maybe, exactly the right time.  We’re on the cusp of a potential discovery, and if that’s the case, and I believe it is, it’s a nice recipe for significant growth.