Home Mining Electrification of Everything

No copper, no clean future

The surge in copper futures is a clear sign of the structural deficit for the conductive metal. Look around your home or office and you’ll quickly see how our society is plugged in to so many devices and tools which didn’t exist ten years ago.

Bank of America forecasts global copper consumption to rise 6% to 24.76 million tonnes in 2021.

McKinsey & Co. estimates global electricity consumption will double by 2050, led by the electrification of transport and buildings.

Want to understand the momentum behind surging copper prices?

Copper is central to the development of a clean energy infrastructure and the massive build out of electric vehicles.

Without copper, there is no clean future. 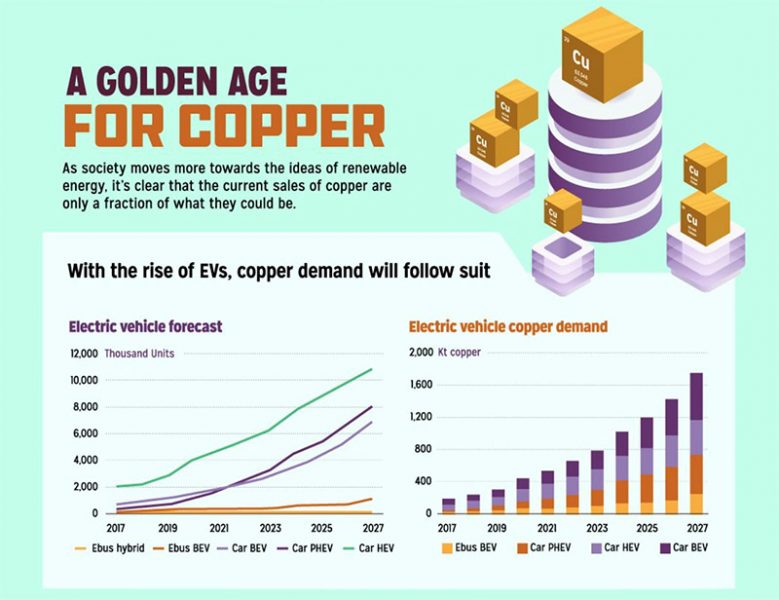 Renewable energy is a powerful trend around the world.

And with every windmill, solar panel, and battery installed… the world is building a supply-demand imbalance in one critical metal: copper.

According to ABB Velocity Suite research, the U.S. installed 3.5 gigawatts of new wind farms in the first half of 2020, and has another 21 gigawatts under construction. That works out to more than 95,000 tons of copper.

And according to the Solar Energy Industries Association, there are 115 gigawatts of new solar projects under construction or development. Those will require another 728,000 tons of copper.

So, these energy projects alone equal 40% of that demand. The copper demand from just the wind and solar projects in the U.S. is equal to about 3% of global copper mine output.

That’s a huge increase in demand. But supply isn’t keeping up. 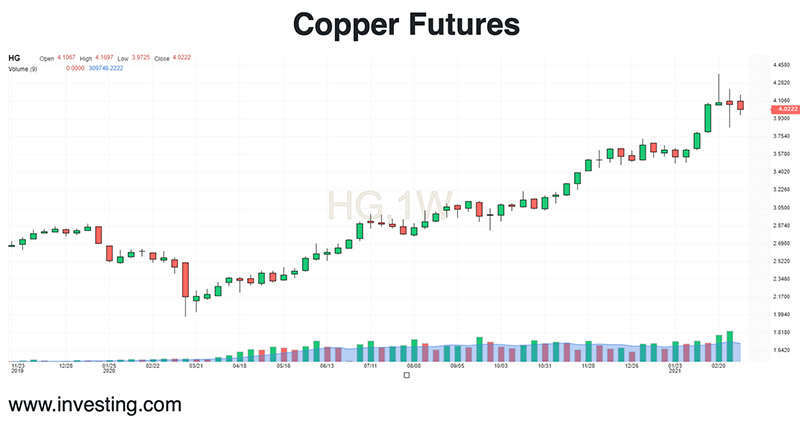 As copper prices rise in response to rising demand for copper assets, mines and deposits will go up in value.

It’s time to get in front of the next wave and consider adding a copper position to your portfolio. Share prices in the major copper miners made up the first wave and that’s why we need to talk about the Kutcho Copper (TSX-V: KC)(OTC: KCCFF).

Kutcho Copper is on a clear path to develop their 100% owned high grade copper-zinc project located in the Golden Triangle region of British Columbia.

The Kutcho project is in a top mining jurisdiction, with major mines and active projects including Pretium’s Bruce Jack mine, Seabridge’s KSM project, Teck/Newmont’s Galore Creek and Imperial Metals’ Red Chris mine.

The project covers 65 square miles. Under the surface is a giant volcanogenic massive sulfide (VMS) deposit. These deposits are the remains of metal-rich, deep-sea vent systems.

As a group, VMS deposits are important sources of the world’s copper, zinc, lead, gold, and silver ores. They often contain metals like cobalt, tin, indium, tellurium, gallium, and germanium in economic quantities as well.

The 2017 prefeasibility study (PFS) demonstrated its economics at different metal prices. The table below summarizes that report’s findings. The final column compares those cases against current prices:

And the company continues to grow the deposit.

The upcoming feasibility study (FS) will answer the question of how much more it’s worth now at higher metal prices.

One thing is for certain: the net present value (NPV) is many times what the stock is currently trading for.

The project boasts excellent grades (18.6 MT of Measured & Indicated at 2.58% CuEq1 and 13.2 MT of Inferred at 1.59% CuEq1). Kutcho continues to improve metallurgy and the latest results achieved an average recovery of 93.4% for copper and 86.75% for the zinc component. 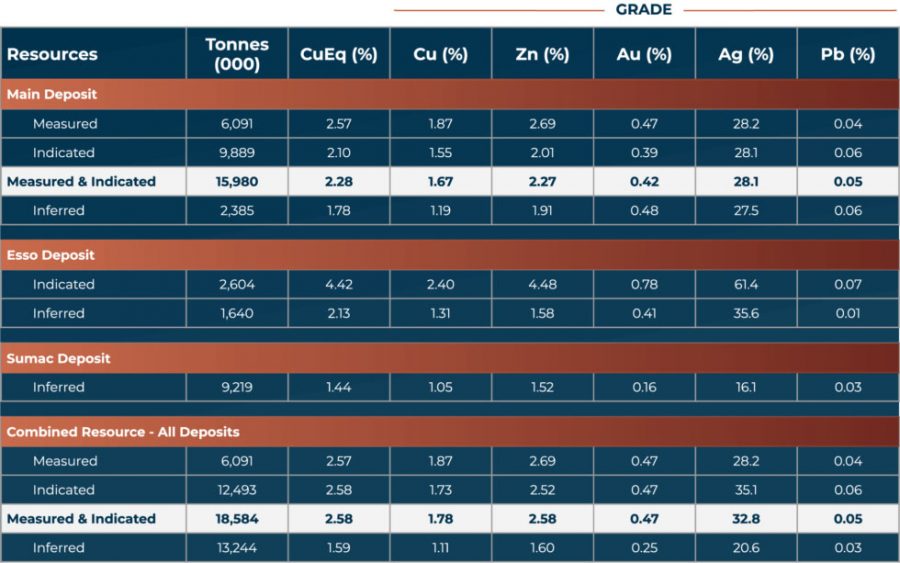 The effective date of the estimate of mineral resources is September 8, 2020.

Mineral resources do not have demonstrated economic viability.

This updated mineral resource is currently being used as the foundation for the Feasibility Study, which remains on track to be completed shortly. That will add clarity to how much metal is here and what the value of the project is at current metal prices.

In 2017, Wheaton Precious Metals, a major streaming and royalty company, provided Kutcho (then Desert Star) with a C$100 million financing to make the acquisition of the project.

The package includes a C$20 million convertible loan, C$7 million to fund the current feasibility study, and $58 million in development capital. If Kutcho expands the mine to a 4,500 tonne per day operation, Wheaton will pay another C$20 million.

In exchange, Wheaton gets a stream of 5.6 million ounces of silver and 51,000 ounces of gold from the mine’s production. They pay 20% of the spot price. After Kutcho meets those volumes, Wheaton’s stream decreases to 66.67% of silver and gold for the life of the mine. 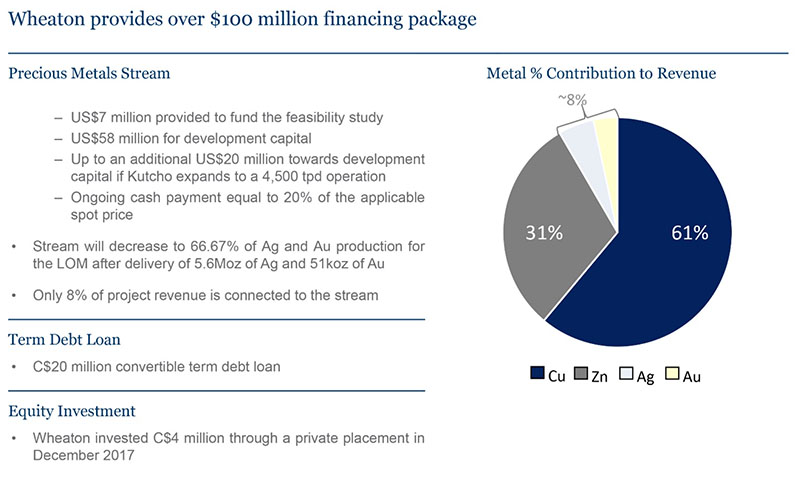 From Wheaton’s due diligence, their actions are a strong endorsement of the project. They also deferred interest payments to let Kutcho complete its feasibility and move the project forward.

After multiple-year lows, there was little motivation to bring on new global supply. CapEx spending for the base metals sector had been cut, as projects and expansions of existing mines had been delayed. However, a sharp rebound which started in Q2 2020 has continued early this year to near ten-year highs.

In the current market, the steady rise in copper prices signals an improving economy and a flat production curve which indicates a structural deficit. Kutcho is on track to complete the Feasibility Study and advance the high grade copper-zinc project when base metals are in high demand.