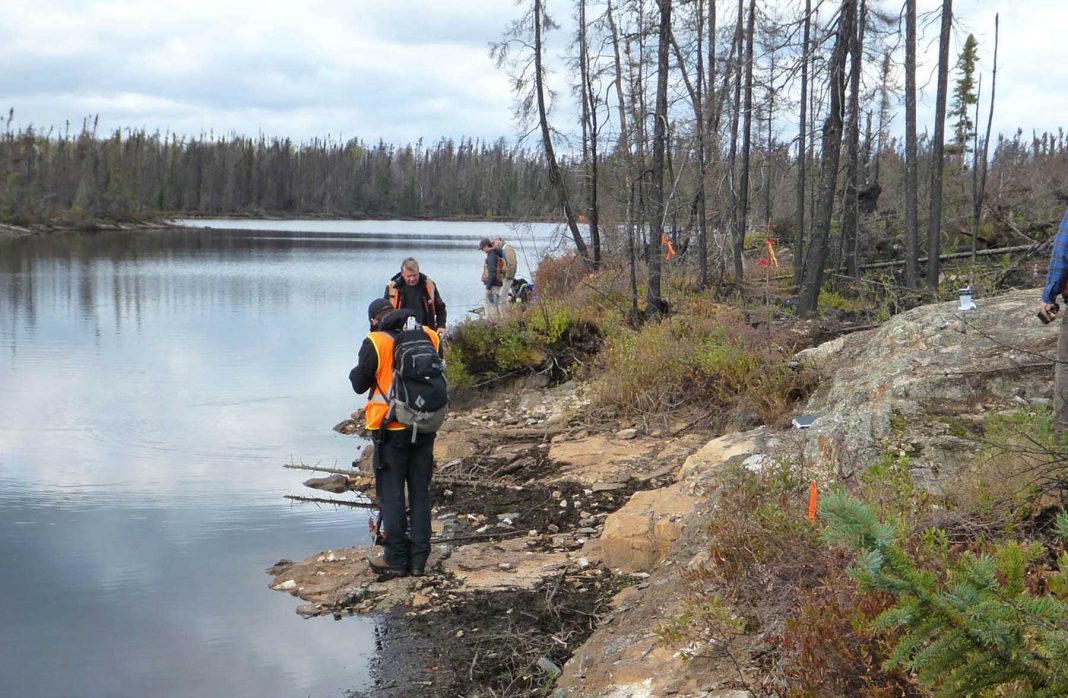 Caesars Report coverage includes SSR Mining’s most recent quarterly results from the new Fisher JV which adjoins their active Seabee Gold Operations. For those new to the story, the promising results started with district wide systematic exploration across the 33,171 ha Fisher property which revealed the Santoy Shear. Discovery of this key structure would lead to multiple gold discoveries now being drilled. The Santoy Shear emanates directly from the high margin Santoy Mine which is 1.5 km from Fisher’s northern boundary and the shear extends for 7km to the south, it remains open along strike.  The geological model is holding up and the JV has selected 1 of 4 discoveries to begin resource definition. The original source can be found here https://www.caesarsreport.com/reports/taiga-gold-from-discovery-to-resource-definition-drilling-at-fisher/

Back in January, it was very encouraging to see SSR Mining (SSRM, SSRM.TO) decided to formalize the 80/20 joint venture with Taiga Gold (TGC.C) on the Fisher project official by providing official notice and making a C$3M cash payment to Taiga Gold. The SSRM technical team obviously must have liked what it saw and the recent exploration update provides a better understanding of why SSR Mining made the decision.

After making several gold discoveries on the Fisher land package, SSR Mining has now figured out the Mac North zone and this year will be the start of a resource definition drill program, the first one ever on the Fisher project, and this could be a major milestone for Taiga.

The importance of the recent update

The drill results which were released last week weren’t ‘just another set’ of assay results from the Mac North zone where the technical teams were continuing to work on the gold discovery made in 2019, the main takeaway of the exploration update weren’t the gold grades nor the intercepts.

What mattered in last week’s announcement is the Santoy structure and the proof of concept. The gold-bearing mineralized structures in the Seabee-Fisher region are determined by what could best be described as ‘flattened cylindrical shoots’. The past 12-24 months, SSR Mining was figuring out how those cylinders were twisted (it’s not because you find gold you immediately know what the 3D version of the system looks like), and the technical team now seems to have confirmed its theoretical concepts. A cylinder-shaped zone of mineralization, quite similar to the gold mineralization currently being mined at the Santoy Deposit 10 km to the north has now been determined and this gets the joint venture partners to a more exciting phase of the exploration program at Mac North: resource definition drilling.

Now that the shape and structure have been figured out, this year’s drill program will now try to connect the dots and perhaps end up with a maiden (inferred?) resource estimate at Mac North. Drilling should start in a few weeks so we should see some assay results by this summer.

Keep in mind there’s no guarantee the resource definition drilling program will confirm the existence of a coherent and economic resource. But given the location of Mac North (as you can see on the map below, it’s pretty much within wheelbarrow distance from the Seabee mill just north of the Fisher property), SSR Mining likely won’t need much to further advance Mac North as a satellite deposit to the Seabee mine. Keep in mind the existing infrastructure (mill & equipment) is already in place so the only capex associated with developing a satellite deposit would be the underground mining development and perhaps road construction to haul the rock from Mac North to the mill. 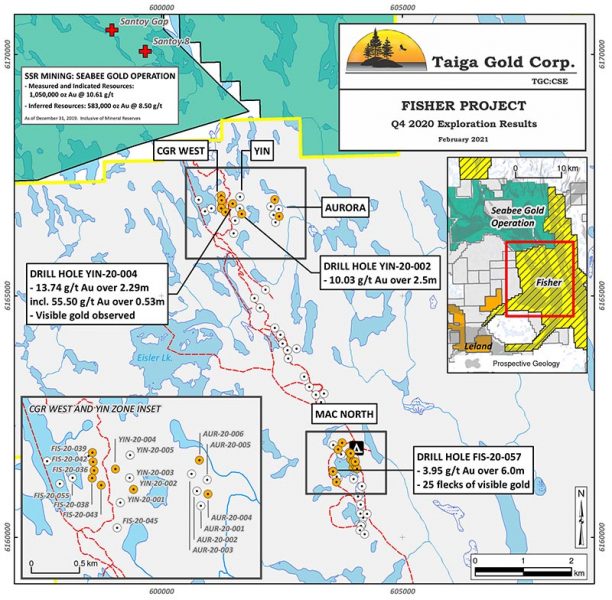 Everything obviously will depend on the size and grade and while it’s still a bit early to speculate, a coherent resource of 250-300,000 ounces could theoretically be sufficient to strongly consider developing Mac North as a satellite deposit for Seabee. Of course, we are still at least  5 years away from any production from Mac North and there is no guarantee Mac North will reach the finish line. We’ll know much more after the resource definition drill stage.

And now the proof of concept has been delivered at Mac North, the technical teams will continue to work on the other high-priority exploration targets. It goes without saying Mac North is just one of the many areas of interest on the Fisher project as several gold discoveries have been made on other zones as well. 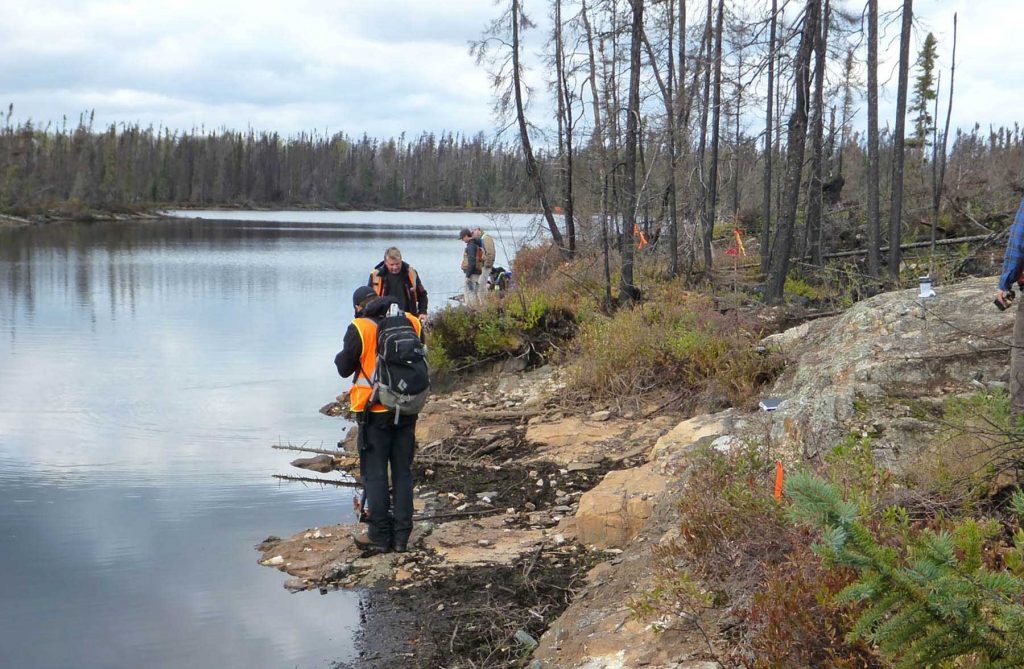 This means two things. First of all, SSR Mining encountered enough mineralized zones that piqued its interest to formally go ahead with the joint venture after spending in excess of C$15M. This means SSR Mining is here to stay and seems to be somewhat confident of finding a gold deposit that could act as a satellite deposit to keep the Seabee mill fed.

Secondly, this also means Taiga Gold will now have to contribute its share of the joint venture. If SSR mining proposes a C$5M exploration budget, Taiga Gold will have to (be able to) put C$1M on the table to fund its share. Considering we are still in the early stages of the exploration story at Fisher, we expect Taiga to continue to fund its pro-rata stake in the joint venture.

And there are some risks involved. SSR Mining is a multi-mine producing company with about half a billion dollars in net cash (!) in the bank. It can decide to spend C$10M on Fisher without as much as blinking an eye. We have seen how SSR Mining took advantage of poor decision making at Golden Arrow Resources (GRG.V) which had to relinquish its 25% stake in the Chinchillas project after it was pushed into a corner by SSR Mining and likely would not have been able to meet the cash call requirements.

That’s why it will be very important for Taiga Gold to maintain a healthy treasury at any given moment to make sure it can continue to fund its 20% share of the Fisher exploration programs. To be clear, Taiga is well-financed at this point as it just received C$3M in cash from SSR Mining when the latter exercised the option agreement earlier this year. With about C$4M in cash on the balance sheet, Taiga Gold will be able to comfortably meet the cash calls in the next 18 months. We don’t anticipate SSR Mining spending more than C$15M in that time frame which means Taiga’s theoretical cash contribution would be C$3M.

Back in January, it was very encouraging to see SSR Mining decided to formally go ahead with the 80/20 joint venture with Taiga Gold. Considering SSRM was quite busy in 2020 with about 13,000 meters and 37 holes drilled on the Fisher project (not just at Mac North), the producer must have liked what it saw, and after seeing the recent update by Taiga Gold we now understand why SSR formalized the joint venture. The 2020 drill program has delivered the proof of concept on the Mac North zone and a resource definition drill program will start this year and this could result in a maiden inferred resource estimate towards the end of this year. And keep in mind Taiga Gold doesn’t just own a 20% stake in the joint venture, but also retains a 2.5% NSR on the future gold production on the majority of the Fisher project. Some of the ground is subject to underlying royalties which reduce Taiga’s 2.5% NSR, but Taiga retains a healthy net smelter royalty on the vast majority of the Fisher land package.

Meanwhile, Taiga Gold obviously still has other irons in the fire as its partner SKRR Exploration (SKRR.V) remains focussed on the Leland gold project where recent drilling activity has just wrapped up, and Taiga is planning a major maiden drill program on its 100% owned Orchid project, expected to commence in early 2021.

When we first discussed Taiga Gold (TGC.C) in March, we were looking forward to seeing the results of the past winter exploration season. SSR Mining (SSRM, SSRM.TO) was able to almost fully complete its drill program on the Fisher property before it suspended operations at the very profitable Seabee gold mine in Saskatchewan due to the COVID-19 outbreak.

It always takes a little while for the assay results to come in, but SSR Mining has sent Taiga Gold a comprehensive overview of the exploration results and this allowed Taiga to publish an exploration update themselves. As the exploration programs on Fisher aren’t material to SSR Mining (which produced almost half a million ounces gold-equivalent in 2019) SSR won’t report on these drill results themselves but they do make a big difference to Taiga Gold as Fisher is by far the most active project in its portfolio.

Taiga’s business strategy to option some of its projects out to third parties is paying off as this will allow the company to remain active on three fronts while the partners do the majority of the heavy lifting.