Home Mining When is the Takeover of Taiga by SSR Scheduled?

SSR Mining (formerly Silver Standard Resources, a much cooler name) owns and operates the Seabee Gold Mine in Northern Saskatchewan province in Canada. In 2019 the company produced over 112,000 ounces of gold at the project.

Right next door a tiny junior named Taiga Gold (TGC-C), a spinoff from Eagle Plains, owns the Fisher deposit. The Fisher project contains more than 20 km of the same Santoy Shear Zone that is currently being mined by SSR at Seabee. SSR has a joint venture with Taiga on the Fisher property. In January of this year SSR paid Taiga $3 million and formed an 80/20 JV. 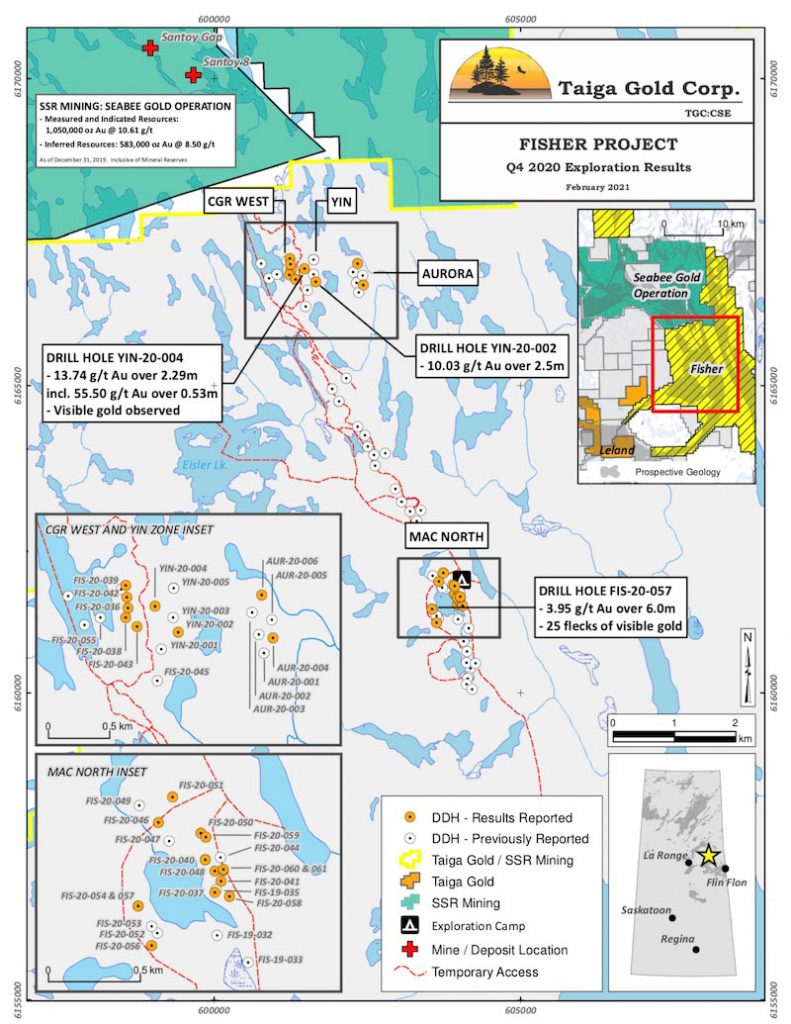 A few weeks ago Taiga announced commencement of a new 2,800-meter drill program that has 15 holes planned. Drill results to date confirm similar grades and widths as that of the Seabee mine. SSR has another 6-8 years production at Seabee but obviously would like to have more in reserves nearby. SSR has actually spent over $12 million in exploration at Fisher when they were only required to spend $4 million to earn their interest.

SSR will buy out Taiga at some point. SSR has over $860 million in cash and they earned $140 million last year. There are two questions, (1) when will they buy the remaining 20% of Fisher and (2) what will they pay? They will have a very good idea of the dimensions of the strike of the Santoy Shear. I’m just guessing because there are few hard numbers but if Seabee has a current resource of just over 1.6 million ounces and a P&P reserve of about 500,000 ounces, I don’t think it would be a stretch to say Fisher could have a resource of 500,000 ounces to 2 million. If you valued the 500,000 ounces at $200 an ounce that would make Taiga’s 20% worth $20 million. If you valued the 2 million ounces at the same $200 an ounce, that would make Taiga’s 20% worth $80 million.

Currently Taiga has a market cap of about $14.4 million and has $4 million in cash for an enterprise value of about $10 million. Saying they have 500,000 ounces at Fisher is conservative as is saying it’s worth $200 an ounce to SSR. SSR will buy them out and should gold continue higher in the medium-term, SSR will probably decide to do it as long as Taiga is absurdly cheap as they clearly are now.

Taiga has another arrow in their quiver at their 100% owned Orchid gold property. They plan a 2,200-meter drill program soon in 16-20 short holes. In my opinion, Taiga is a wonderful perpetual call on gold. Fisher is worth something and will be bought out at some point and meanwhile they are drilling a high potential backup.

Taiga is an advertiser and I participated in the last private placement. Naturally that makes me biased so take some responsibility for your own investment decisions and do some due diligence.